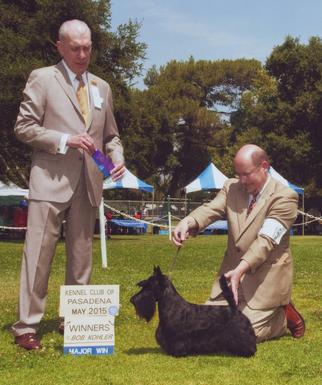 We noticed this young dog and his littermates by breeder Halina Radziuk and, as they grew, we realized he could add a lot to Bravo Scotties. Rod had personally gone over three of the four grandparents in Bomond's pedigree.

Bomond entered the United States with his tail bang up, made a few Scottie comments, and stepped right into the Ottcienda to own the place. At his first show, he was awarded Winners Dog and Best of Winners, won a major by going Winners Dog during the Mission Circuit, and sired his first litter for Bravo Scotties in 2015 when Chicory whelped her first litter. He finished his  U.S. championship with a total of three major wins and by going Winners Dog, Best of Winners, and Best Opposite Sex over specials. In his three litters sired for Bravo Scotties, he has produced group winning and group placing offspring, champions out of all three litters, and will have one of his daughters representing Bravo Scotties in Australia as of April 2017.

Bomond produces amazing coat, almond shaped eyes, varminty expression, lovely fronts, and Scottie attitude. We are thankful to have him as a stud dog for Bravo Scotties. Bomond lives in Southern California as a house dog with a wonderful co-owner and we have full access to him.