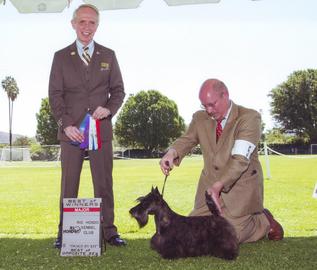 One of four boys out of our Digger x Lara litter, Grant always had a great impish expression on his face. Actually, he destroyed many hoses in our back yard and one of his favorite games was dumping the water bowl and playing "hockey" with it up and down the sidewalk.

A very sweet boy, Grant won two majors in California under Mr. Chuck Trotter and Mr. Fred Bassett before he spent a few months in Texas with handler Chuy Moreno and then returned to California and spent  a few weeks with handler Gabriel Rangel to finish his championship.

Grant ultimately finished his championship with four majors, including one major win going Winners Dog, Best of Winners, and Best Opposite Sex over specials under judge Mr. Jay Richardson and upon finishing his championship, his owner Cathy LeRoy was swiftly on her way to pick up her boy.

Grant is a ball-playing fiend, looks after his older housemate Simba (a blind Cairn), schools his younger nephew Mac, plays at doggie day care several times a week, and enjoys life in New Mexico. Grant is a great ambassador of the breed.